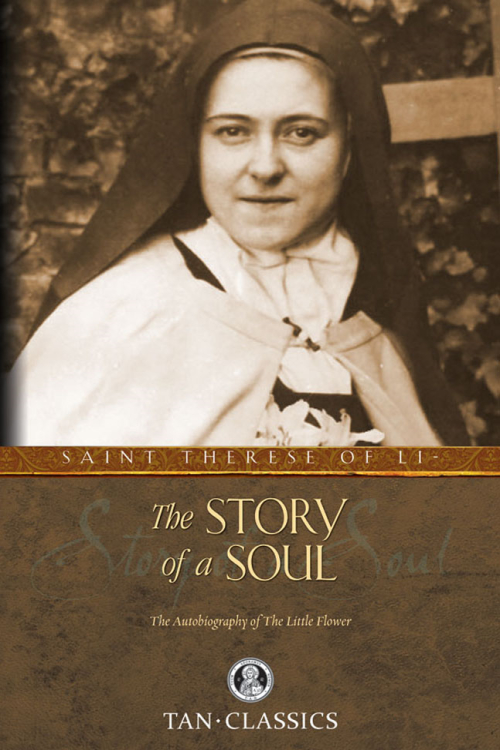 The Story of a Soul conveys St Therese of Liseux’s “Little Way” of spiritual childhood – her “elevator” to Heaven, as she called it. This method was approved by Pope Pius XI as a way for all to grow in holiness through unfailing confidence and childlike delight in God’s merciful love.

Again and again in this book, St. Therese shows us how her “Little Way” of love and trust comes straight from Sacred Scripture.

This book belongs in every Catholic home, for Pope St Pius X stated St. Therese of Liseux the “greatest Saint of modern times”.

St. Therese of Lisieux, also known as “Therese of the Child Jesus” and “The Little Flower”, was the last of nine children born to Louis and Zelie Martin, at France in 1873. She was often anxious and depressed in childhood, as she suffered the early death of her mother. After she converted interiorly and began to read Thomas a Kempis’ The Imitation of Christ, she joined 2 of her sisters in a discalced Carmelite convent as a nun at just 15 years old. After her oldest sister was elected prioress, Therese became a permanent novice to allay suspicions that her family was dominating the small community. She lived humbly, concealing her intense prayer life and countless sacrifices

Therese is the author of her own popular autobiography entitled The Story of a Soul, which she began writing in 1895, and she instituted a simple path to holiness now widely known as the “Little Way”. She died of tuberculosis on September 30, 1897, at the age of 24 and was canonized only 28 years later, in 1925, by Pope Pius XI. She was later installed as the thirty-third Doctor of the Church by Pope John Paul II in 1997.